Over delicious Greek food with my girlfriends, we had this conversation:

Me: I was made to parent boys, yall. I love boys. I love them dirty and reckless and dumb as a sack of diapers. I love their ridiculous “projects” and adventures and all that. I love how they are always one step away from dismemberment or death. It’s so fun. Boys are the best.

[Blank stares from my girlfriends]

Amy (mom of 4 boys): Last week, I caught Grey (3-years-old) on top of my dresser fetching a hunting knife from Brad’s “hiding place” so he could cut the top off a water bottle because he couldn’t get it opened and I was still sleeping. I believe we have two different definitions of “fun.”

Lynde: Um, you do remember that I wouldn’t let my 14-year-old high school son go to our suburban neighborhood park because I was convinced people might be selling drugs there, right? You’re barking up the wrong tree, sister.

They are totally right. I’m cut from a weird cloth here. I have the parenting sensibilities of a typical 1970’s mom whose only concern with her children was that were under her feet and needed to get outside. 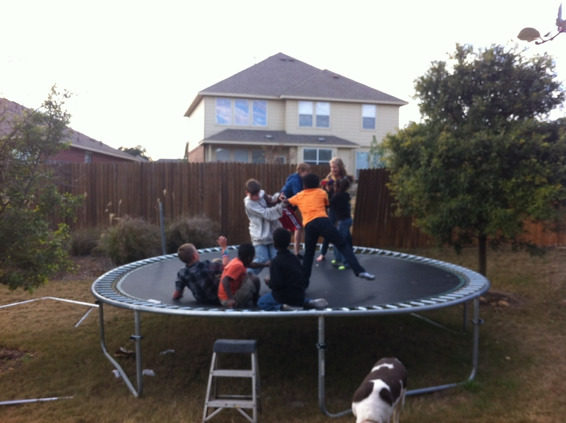 What?? Oh, I guess 8 kids on the trampoline with no net is
FROWNED UPON IN THIS ESTABLISHMENT! 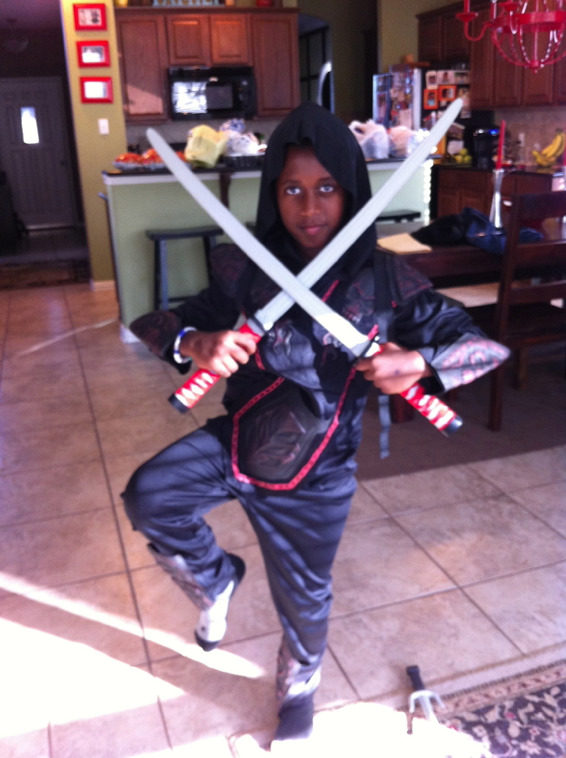 The first line of Remy’s prayer last night: “Dear Lord, I wish my mom and dad were ninja.”
She lives in a house of boys, Lord. Just ignore it. 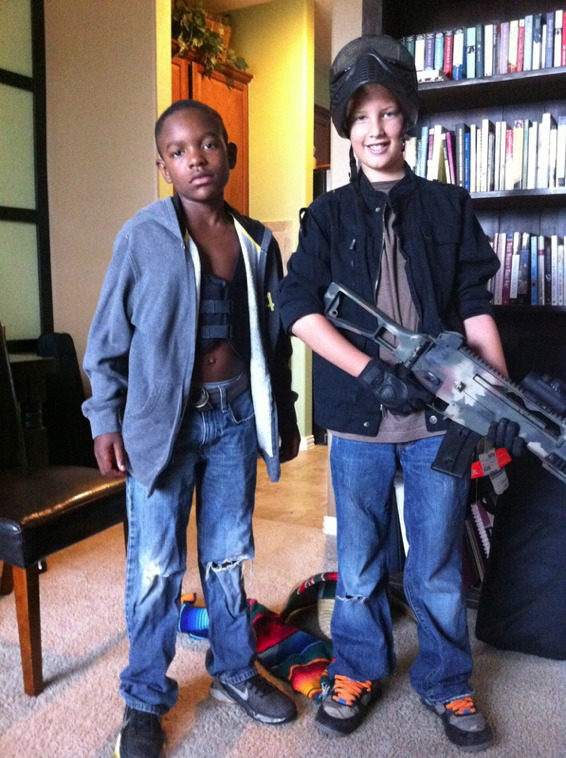 This picture is my whole life’s happiness. Please note his friend’s bare chest and football pads, in which he looked in the mirror and said, “Caleb, dude, this makes me look buff.”
Oh sure, when my kids were babies I lived in total fear, because obviously now that they were living outside my body, the universe was conspiring to kidnap/maim/emotionally injure/murder them. It was just a matter of time. Were it not for my diligent oversight, our neighborhood would undoubtedly be overrun by white vans with dark windows waiting for me to simply turn my back whilst they zipped my kids over to the black market.

But then I kept having more babies, and you know, those chillins started wearing me out. I began to use my precious mental margin less on strategies for rescuing us from a submerged car and more on just getting everyone the freak through each day. We emerged from several potentially life-ending scenarios unscathed: public restrooms, parks, driving over bridges, eating raw carrots, not-washing-hands-after-pee-pee, and I began to lighten up.

As a product of my own parents’ philosophy, perhaps this scene from 1985 might illustrate my point:

We were at our family cabin outside Colorado Springs for our summer vacay. My brother, 7, and our cousin Dorie, just 9, were outside at night in our family station wagon, curled up in blankets with the portable VHS TV, watching – wait for it – Candyman, which despite the enchanting name, is actually a petrifying horror movie for grown adults. (TV timeout: Really, Mom and Dad? Candyman?? For a 2nd  and 4th grader?? You understand my generation won’t let their kids watch Scooby Doo because of the fake ghosts, right?)

So as the two elementary-aged children were watching a parent-sanctioned horror movie in the middle of a dark forest, my dad and uncle decided it would be “hilarious” to sneak up on the car, make weird scratching noises, then scream and bang on the car in unison. Twenty years later, my brother and cousin will still pee their pants at the mere mention of it.

While Candyman and subsequent terror might have pushed the boundaries, I miss the days-gone-by of laidback parenting. I love boys to be boys, kids to be kids. I like to send them straight into the forest with hammers, knives, nails, duct tape, and hand-drawn blueprints and not hear boo from them in five hours. When they come home filthy and scratched, telling tales of skateboard ramps gone wrong and forts, I cannot express how much this thrills me.

I often feel like I’m surrounded by parenting books and mom blogs that are just…so precious…so earnest…I struggle to find connection and walk away discouraged and disillusioned and frustrated. We Hatmakers are simply not precious people. From Precious Ones we did not come, and Precious Ones we will never be.

Honestly? I like a little grit in my story. I often feel suffocated by my generation’s insistence on safety and control and perfection and hegemony. I genuinely like my kids to be a little wild and free. I want to have to say to my sons, “Only boys would think something like this up,” and pretend to be put out when really I’m enamored.

We are on a spectrum as parents, aren’t we? At the beginning, it is full control, total adult responsibility. At the end of the main session, when they crush our hearts and leave for college, we they need to be weaned off. Somewhere in the middle, the needle has to move toward launch. What better place to practice growing up than under our roofs, still protected from total self-destruction by the safety net of childhood?

I’ve seen older kids babied within an inch of their lives, headed off to higher learning with no clue on how to be resourceful, how to figure it out, how to handle life’s knocks and bruises. Over-protection has its place for, say, kindergarteners, but at some point we need to put down the bumpers on the bowling lane.

Psychology Today stated, “According to a recent study by University College London, risk-taking behavior peeks during adolescence, suggesting that teens are “programmed” to take risks more often than other age groups… Contrary to popular belief, not all risk-taking is bad. In fact, many risks are not only good, but promote healthy neurological development and growth during the critical adolescent period.”

Not all risk-taking is bad risk-taking. For the love, don’t we want to raise kids who go for it? Who are brave and headstrong? These are not just the marks of achievers; they are the hallmarks of disciples. If we expect our kids to engage this broken world one day, safety has to be somewhere around #14 on the list. Our children will be totally ineffective if they are still afraid of their own shadow.

Are they going to blow it or fail or struggle in this parenting tract? Of course! Erwin McManus said his teen son asked him once: “Dad? Would you ever let me be in a dangerous situation?” Erwin answered, “YES! Totally!” and his son said, “I thought so. I was just making sure.”

We love Romans 8:28 for our kids: “And we know that in all things God works for the good of those who love him, who have been called according to his purpose.”  But can we accept the very next verse?

“For those God foreknew he also predestined to be conformed to the image of his Son, that he might be the firstborn among many brothers and sisters.”

Being conformed into the image of Jesus is not a pretty process, because our kids are born into sin and God has messy, real work to do to transform them into disciples. This process involves sacrifice and loss and struggle and failure and courage and maybe even danger and cultivating a single-minded obsession with the kingdom. They may embarrass or disappoint or scare us as they wrestle with God, but can we see his redemptive hand in their lives even then?

When have you grown the most? Changed the deepest? STRUGGLE. Failure. Loss. Risky obedience. Messy relationship mending. Our kids are the same. Our job is not to shield them from everything hard, but to parent them through it with wisdom and discernment. We should not pull our kids completely out of this culture in some parallel Christian universe, but teach them to navigate the real world with grace and conviction. This requires a gradual process of letting go, so our kids can actually live a real life with real people and real problems and discover the real God who shows up there.

I don’t want my kids safe and comfortable. I want them BRAVE. I don’t want to teach them to see danger under every rock, avoiding anything hard or not guaranteed or risky. They are going to encounter a very broken world soon, and if they aren’t prepared to wade into difficult territory and contend for the kingdom against obstacles and tragedies and hardships, they are going to be terrible disciples.

I don’t want to be the reason my kids choose safety over courage. I hope I never hear them say, “Mom will freak out,” or “My parents will never agree to this.” May my fear not bind their purpose here. Scared moms raise scared kids. Brave moms raise brave kids. Real disciples raise real disciples.

May we let the leash out, bit by bit, and allow our children to take big giant gulps of LIFE. Because their time under our roofs is waning as we speak, and we get one shot at this. One more quip from Erwin McManus, because THIS, this is the stuff:

One summer Aaron went to a youth camp. He was just a little guy, and I was kind of glad because it was a church camp. I figured he wasn’t going to hear all those ghost stories, because ghost stories can really cause a kid to have nightmares. But unfortunately, since it was a Christian camp and they didn’t tell ghost stories, because we don’t believe in ghosts, they told demon and Satan stories instead. And so when Aaron got home, he was terrified.

“Dad, don’t turn off the light!” he said before going to bed. “No, Daddy, could you stay here with me? Daddy, I’m afraid. They told all these stories about demons.”

And I wanted to say, “They’re not real.”

He goes, “Daddy, Daddy, would you pray for me that I would be safe?”

I said, “Aaron, I will not pray for you to be safe. I will pray that God will make you dangerous, so dangerous that demons will flee when you enter the room.”

And he goes, “All right. But pray I would be really, really dangerous, Daddy.”

Tough, right?? I’m with you, Mamas and Daddies. Knowing when to let go is hard. Have any tips or stories to help us become brave parents?