The other day, I turned the corner and saw Remy straddling the banister, preparing for a leisurely slide down the stairs. (Related: This is why our banister has been pulled out of the sheetrock twice. We can’t have anything nice. Our kids can find a way to destroy solid cement floors.)

Ok listen, some things have been happening around here that I feel the need to unload. Do we slide down banisters? Perhaps. And maybe my sons and their friends sometimes line the stairs with sleeping bags and surf down on boogie boards where they crash land on the pile of pillows arranged at the bottom. It’s certainly not with my approval.

Um, that is not my voice. I would never condone this behavior.
I realize this video causes you alarm if your babies are all six and under or if you only have one precious cherub, but trust me, a few years and few kids later? You won’t be nearly the Safety Susan you are now. You’ll be all, “Oh well, it’s just 22 miles away. Yall double buckle…” when you’re out of seats in your car because all your kids’ friends have piled in and you have to get to Schlitterbahn or die trying.

You will sell the “elbow and knee pads” in your garage sale to a mom with a preschooler.

Despite your best common sense, you will send your kid to school with a Lunchable.

You will leave the trampoline up long after the net has been torn down by your savage kids.

You will lighten up. And miraculously, your kids will still live despite the absence of your hypervigilance. (My mom didn’t know where I was for approximately one-fourth of my elementary years. She saw me at dinner after I wandered home from my adventures. “Where did all those scrapes come from, Jen?” “I fell off some scaffolding at that abandoned construction site where me and Amy were hunting for scorpions.” “Well, you seem fine. Set the table.”)

Clearly, I’m not the hovering Mama I once was. As this picture demonstrates: 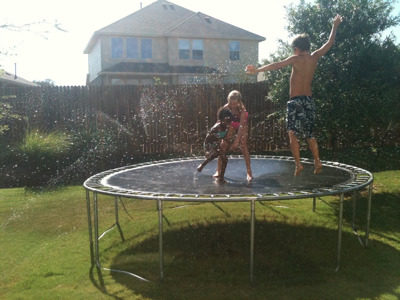 We add water to our Death Trap Trampoline to expedite the possibility of a broken femur.
But something has happened to me since the arrival of our newest Hatmakers from Ethiopia. I’ve taken a couple of steps backward…past caution, right through watchful, beyond fastidious, and all the way to fantasy, apparently. Conversation between me and Brandon:

J: I feel so frustrated.
B: Why?
J: We have a fresh slate with Ben and Remy. We haven’t ruined them yet. This is the time to introduce our systems and chore charts and stuff. We need a marble jar for good behavior. I read about that somewhere. I really want to show them how we run a smooth, efficient home with teamwork and diligence.
B: (after five seconds of silence) What family are you talking about?
J: The Fake Family I invented in my head.
B: Uh-huh. And how’s that working out for you?
J: It’s awesome. I love Fake Family. Their kids wash their hands after using the bathroom every single time.
B: Because they have such organized, responsible parents?
J: Yes. And Gavin is the starting quarterback on the high school varsity team. As an eighth grader. He’s that good. Mack Brown is interested; he started following me on Twitter. And in Fake Family, I’m a size four because I make better choices.
B: Wow. Fake Jen sounds awesome.
J: Really? Did I mention Fake Brandon always closes the cabinet doors after he opens them and he never complains when I ask him to “fix my iTunes” again? He is spectacular.

I had these ideas about bringing the kids home to a perfectly run household with impressive structures and systems; our food was all organic obviously, and our kids miraculously stopped fighting. In fact, after Ben and Remy arrived, there would never be another argument in our home. We would be the ideal prototype for responsible child-rearing. Our kids would track with math and science scores reported from Japan. They would certainly not become addicted to Movies on Demand or Angry Birds, because they could only earn a maximum of fifteen minutes of screen time a week after completing their required chores and “bonus exercise points” through the online job chart we complete by 6:30pm each night, after enjoying the traditional Ethiopian meal I made from scratch but before their systematic language instruction (their bedtime ritual), which would really just reinforce the conversational practice they’d enjoy with our Amharic tutor three days a week, refreshing their native tongue and instructing the rest of us as well. We’d all be pretty fluent by Halloween. (It’s just because we love them so much. Don’t make a big deal out of it.)

Fake Family is impressive. Let me tell you. They would sail through their post-adoption social worker visits. People would talk. You couldn’t ignore their awesomeness for long. They would be invited on panels. Dr. Karyn Purvis would comment on their blogs.

But my actual family is just messing all this up, including the person typing this blog. As it turned out, Ben and Remy didn’t join a perfect family; they joined a real family. Oh sure, we chased the dream of raising model children when our bio kids were tiny, but it didn’t take long to release that delusion. Mainly because we weren’t raising characters in books, but human children. We also accidentally discovered that we were human parents and capable of *occasional* missteps.

Our life is no prototype. If you wanted to find holes in our parenting resume, it would take you three seconds. Any critic or unsympathizer could make a quick list of our faults, hypocrisies, blind spots, and double standards (and then send them to me in a direct message…awesome). It would be so easy. We live a messy life in a messy world. There are a zillion ways we could be better. I have no idea if my kids will make the Top 10% of their graduating classes or ‘Just Say No’. Will they choose organic? I feel the chances are slim; it seems certain their college pantries will be rife with Pop Tarts. If they fail half as epically as Brandon and I did as adolescents, we are in for some serious retribution.

I’m not sure when I got the idea that adoption required perfection or that there was some exacting formula that prevents grief and struggle. Maybe it was through the year and a half of daily discussions with my adoption community which: 1.) prepared me more than any other resource, 2.) encouraged, prayed, cheered, and commiserated with aplomb, and 3.) made me a teeny bit paranoid. You know when you over-talk about something, and it takes on this huge life of its own and increases your idling levels and fills your head with more ideas than you can execute, especially considering most of the advice is “before the airport” and super skewed toward other people’s preferences, and it’s kind of like reading those 80-pound bridal magazines that tell you no wedding is complete without pashmina shawls for the bridesmaids and a guided tour of a local museum for guests arriving early? No? Me neither.

Of course, manufactured entirely in my own brain was the notion that their lives have been so unfair and their circumstances so heart-breaking, that surely I owed it to Ben and Remy to bring them into a nearly perfect environment. I would do this so well.

As it turns out, I’m still susceptible to fatigue and discouragement. My other kids didn’t kick that selfish gene. I still don’t have a working laundry schedule that I stick to for more than two weeks. I fed my daughter Chick-Fil-A on her fourth day in America. My lentils don’t taste right. Ben knows how to work the Apple TV by himself. All seven of us have cried in the last two months. The kids’ closets are galloping toward entropy.

Ladies and gentlemen, we’ve had lice.

So for those of you trying to dodge the idea of adoption because your marriage is not perfect and you don’t have your crap entirely together, please let me dispel the notion of “necessary impeccability.” I’m learning this: Orphaned kids don’t need a perfect family…they just need a loving one. You needn’t be fit for display and ready for the adoption speakers’ circuit.

Can you enter into the grief of a child and stay there until God heals? Do you have room on your lap for another daughter who would delight in the same “Carl Books” you read the rest of your kids? Could you direct your diligence toward becoming a healing parent, even if that just means listening and affirming and acknowledging and holding a child through the storm? Can you be miraculously, fantastically present for a child that is positive you too will disappear one day? Do you have the gumption to be oh-so-very consistent with boundaries and discipline, understanding that requiring their respect supplies them with the very security they crave in a parent who is actually in charge, freeing them up to be a kid instead of a survivor?

Then Kelly Ripa or not (“Be even more amazing!”), you can throw your hat in this ring.

I suspect one day our kids will not recall the laundry piled on our couches or every little time we blew it, but I hope they carry into adulthood the security that they were wanted, they were adored, they were cherished, and they were loved. So very loved. Parents, we might not get it all right even seven out of ten times, but failure is not a deal breaker inside the safety of a family. I pray one day we launch our kids into this world whole and healed, redeemed by the touch of their Savior and transformed simply because we loved and we stayed…imperfectly and beautifully.

Admittedly, I miss Fake Family. I loved them so much. On paper. I told Brandon:

J: I’m still holding out hope for Fake Family. I think I might be able to pull it off.
B: You put body lotion in our daughter’s hair.
J: Alright. Never mind. Pass the Pringles.