Stuck in the Doldrums: An Attack Plan

dol·drums
[dohl-druh mz, dol-, dawl-]
noun ( used with a plural verb  )
1. a state of inactivity or stagnation, as in business or art: August is a time of doldrums for many enterprises.
2. a belt of calms and light baffling winds north of the equator between the northern and southern trade winds in the Atlantic and Pacific oceans.
3. a dull, listless, depressed mood; low spirits.

Conversation with Brandon two months ago:

Me:      Blah.
B:         What’s wrong.
Me:      Nothing. Just everything. Everything is bad.
B:         Specifically?
Me:      Just that our kids are probably all going to hate us and struggle with multiple incarcerations, I apparently will gain a pound a month until I die from diabetes, this house is a craphole of chaos, and my weird quirks are getting worse. I hid in the bathroom at another conference.
B:         Is that all?
Me:      And also, only two of my kids love to read, so obviously, Failure, your name is motherhood, and all I do is put out fires and discipline, so I’ve basically come to hate the sound of my own voice. I can’t stand myself and these kids aren’t faring much better on my Like-O-Meter, and I’m sorry to tell you, but your scores aren’t great either. I cannot even talk about emails. My Bible feels like a useless lead weight. I don’t feel like I’m taking skin care seriously enough. I also ate a tub of pimento cheese. All hope is lost.
B:         But at least you’re working on that melodramatic tendency.
Me:      Just lost another four points, Pal. Feels like a dangerous time to mess with me.

I essentially slid into a two-month case of the doldrums, trapped by inertia and overwhelmed by the escape requirements. On my best days, our life is heavy duty, but during my low days, Google search: “fake my own death and disappear,” which Brandon might dub melodramatic, but he is just a dude with a stable mind and can’t be trusted.

Here is the bummer about the doldrums: the very efforts needed to lift out are the same things you’ve lost energy for. The simplest remedies feel like weights drudged up from the bottom of the ocean. Your mind knows to do them, but your will refuses to cooperate. Which makes your mind furious and mired in shame, which makes your will dig its heels and wallow, which makes you realize you are turning on yourself, you are your own worst enemy. No one can oppress me like myself.

Nothing miraculous happened, except one day I said, this is enough. Virtually nothing changed that day. Or the next. These things aren’t overnight success stories, because if it took three months and 459 lazy, unhealthy, toxic choices to get stuck, it takes some time to climb out. Also, the work required is unsexy, ordinary, boring old labor that lacks the appeal of instant gratification and the pizzazz of an unsolicited miracle. I wish I had better news, but apparently we just have to grab a shovel and start digging.

For my dear readers stuck in the doldrums, and may I say that I love you and you are not alone, these are the labors that pulled me through, one teeny moment at a time:

First, make a list of everything you are behind on. The amount of emotional energy this steals from me is almost unbearable. Ironic too, because each line item could be accomplished in minutes at best, a day at worst: mail these things, return this, make those appointments, answer these emails (<— just, omg), scan that contract over, send in the money for that school thing (this, times a zillion, free public school my eye), pick up that stuff, return that phone call (<— just, omg), finish writing that article. Overdue tasks contribute heavily to my Shame Spiral, and writing them all down in one place and slowly crossing them off is an instant boon, literally. Unbelievable the weight that rolls off when the Behind Pile starts to shrink.

Second, the house. For the love of Mary Magdalene, the house. I am one of those annoying people who needs order and declutterfication. Oh to live in chaos and whirl and twirl amongst the piles instead of, say, barking like a seal at the humans who live here and begrudging everyone for being such slobs unkempt people. But no.

So, brace yourselves, we launched another chore chart. This one is simple and repetitive. Everyone has one chore a day, and it is the same every week. This is not for pay, because their prize is getting to live in my house for free, oh my gosh. The kids did these tasks before but with no regularity and primarily after I turned into a lunatic. Not allowing the house to slip into entropy is mentally healing. The chart is imperfect, but even loose structure restores order to my inner turmoil. 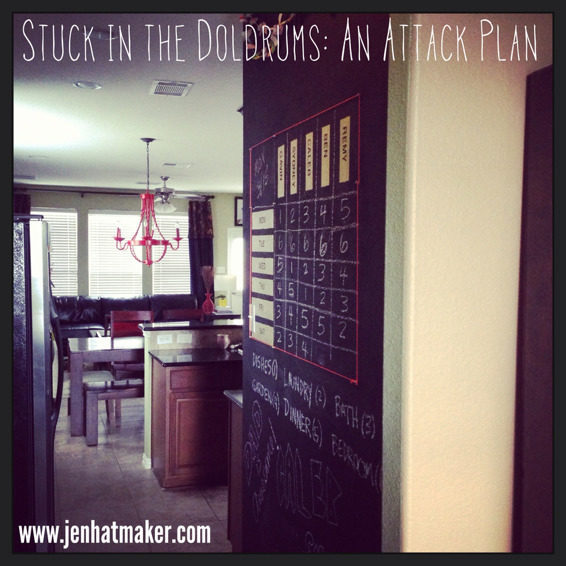 Yes, I succumbed to chalkboard paint. Next up: Chevron.
Third, parenting. Obviously my five kids are perfect and make straight A’s and speak loving words to each other constantly, but clearly their classmates have poorly influenced them lately, because they’ve turned into savages. (This surely has nothing to do with their mother’s two-month doldrum disorder, because children are never the thermometer simply reflecting the temperature of their parents. I’m sure their digression is just a coincidence.)

So this cute thing happened where the kids were horrible and fighting and I went to my room to cry about these terrible children God stuck me with, and He said a little thing to me: He immediately brought to mind six, six lovely moments my kids engineered that very day, and He said, “You are only noticing the bad moments and completely ignoring all the good ones.”

God never coddles me when I want him to, GAH!

So we started the Brag Board. Anytime we catch someone being kind, helpful, gracious, or awesome, we write it down, big or small. It has to be about someone else, because the first thing my humble offspring would write is It was so incredible how I unloaded the dishwasher. Funny thing: I’m not positive they’ve had more shining moments than before, but I’m sure noticing them now. Evidently we will see exactly what we’re looking for. Does this mean I’ve had to follow a certain child around, searching for one tiny good thing to say? Yes. But catching kids in their goodness totally beats reprimanding them only in their struggles, and the Brag Board has pulled the whole family up a few degrees. 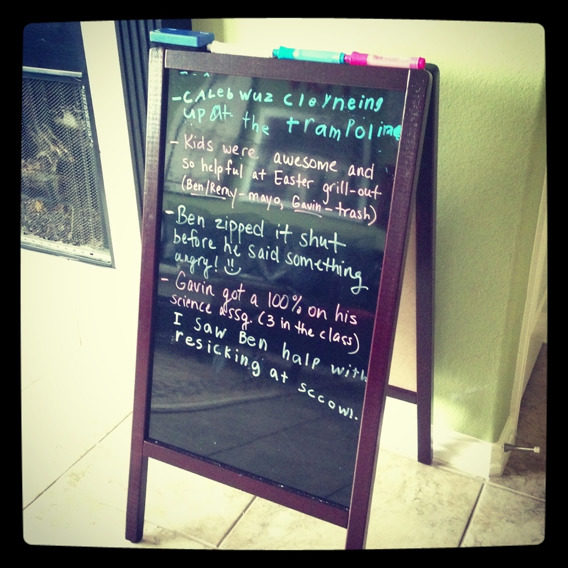 To be clear, Ben was recyling, not resicking, which we frown upon.
Finally, I made a list of all the practices that make me feel healthy. Not surprisingly, I noticed most absent in my doldrums: cooking, reading good books, limiting screen time, eating well, date nights, taking walks, scheduling time with a counselor, being outside, praying, changing out of my pajamas (this is a thing), my friends. All ordinary, nothing new or dramatic. These are mainly things that fit in the gaps of life. But I just committed some time back to my staples, maybe just one a day.

None of these were executed at once. Over a few weeks, I just implemented healthier practices, one at a time. It was not revolutionary when I sat down with Alan Bradley’s latest novel finally (“Whenever I’m a little blue, I think about cyanide which so perfectly reflects my mood” ~Flavia), nor did my world tilt back on its axis when I wrote the first entry on the Brag Board. The chore chart didn’t solve the crisis, and neither did catching up on emails.

But all together, over weeks, just doing the work, bit by bit, digging deep for diligence and grace and best practices, the doldrums receded. These things make us healthy and whole for a reason, because we are not succumbing to disorder and shame anymore. It’s not fancy or quick work unfortunately, but it is effective.

If you feel stuck today, can I suggest approaching the doldrums in a reasonable way, one tiny element at a time? Alone, none of these are monumental, but together they begin to lay small paver stones out of the mire, forging a path back to health. It will be imperfect with incremental steps forward and back, but God can use your brave movement to soothe the shame of stagnation and restore peace to the chaos.

Grab my hand. Let’s do this.

Two things: This is not a post for you to tell me my family is awesome, so thank you for refraining. I am writing this precisely because we have been so unawesome. Second, this does not apply to serious trauma or depression. The doldrums are a funk, not a severe crisis. Sometimes our hearts require therapy, intervention, and possibly medication, and the practices I described are inadequate. Readers, how else do you beat back the doldrums?